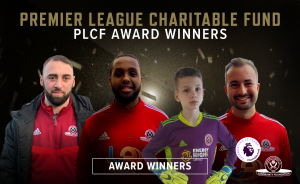 The PLCF 10-year anniversary awards are a celebration of the incredible impact that football clubs have had in their local communities over the last decade.

These awards have given us the chance to celebrate some of the great achievements and transformational journeys made by our participants involved in Premier League funded community programmes.

Please see our chosen award winners and their stories below.

Earl suffered a severe brain injury as the result of a road traffic accident. He started as a very shy young person and joined the Foundation on a traineeship when he was unable to find work. He started volunteering on PL Primary Stars approximately 4 years ago and was mentored by coaches at the time. He has been a consistent volunteer during the last 4 years in schools and has developed his self-confidence and personal skills in coaching. Following his accident, he found his new purpose in life and has recently completed his level 1 coaching qualification and is booked onto his level 2. Earl is an inspiration to all of us.

2 years ago, Rio was struggling in school and being bullied which made him withdraw from participation in class. He had a really tough past, losing his mum at a very young age and having no contact with his dad. Through the support of PL Primary Stars Rio developed his confidence and re-established his love of football and began participating again in school life. To overcome such adversity and develop his confidence is inspirational and his journey should be recognised. Rio is now in year 8 and has trialled for his school football team and is also the goalkeeper for a well-established Sunday League side in Sheffield. Without the support of Primary Stars, Rio would not be in the position to feel comfortable participating in extra-curricular sport. Well done Rio!

Sandro started as a participant on PL Kicks in 2008/09 and with the support of PL Kicks coaches at the time, started volunteering on the weekly football sessions as a teenager. He was supported through his coaching qualifications and became an employee with the Foundation. Today, Sandro is the PL Kicks Coordinator and coaches with our Education team supporting more young people to become better citizens in their communities, but also supporting new volunteers and coaches on their individual journeys. Sandro is inspiring and regularly talks about the journeys of young people currently engaging with PL Kicks. He has supported thousands of young people over the last 11/12 years.

Axel started on PL Kicks 10 years ago as a young person at 10 years old but has been known to PL Kicks staff since he was 8. He has been a regular attendee every year since he started and always respects his peers and staff.  He has recently started his coaching journey on the programme, completing his level 1 coaching qualification and now volunteers on the PL Kicks sessions he attended as a participant.

Rob started as an apprentice in 2010 with the Foundation and has been on a transformational journey. He started working on PL Kicks coaching football in the evenings and helping young people participate and become better citizens in their community. He then became a school’s coach and has been involved in the PL Primary Stars programme from its beginning. He then progressed to PL Primary Stars Coordinator and helped the programme double in size, supporting thousands of children and teachers through sport and physical activity. He has supported many volunteers throughout the last 10 years develop their personal skills and gain qualifications which have resulted in employment. Many of the volunteers who Rob supported have worked for the Foundation and many still do today.

Smokey started as a young person on PL Kicks in 2008/09. When Smokey was 18, he spent most of his time volunteering on PL Kicks and with the support of PL Kicks staff, he developed the confidence and skills to apply for college and then university. Smokey has inspired many young participants to become better citizens and is now working with the Education department to support young people gain qualifications in college. Smokey still coaches twice a week on PL Kicks to support, inspire and give back to his community.

Congratulations to our award winners!

Head over to our YouTube Channel here to see full interviews with our award winners.