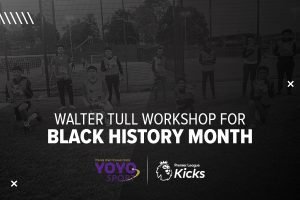 Throughout October, young people on our PL Kicks and YOYO Sport sessions have been honouring Black History Month by taking part in pitch-side workshops during their football sessions. Participants who attended our sessions in Sharrow and Firvale have been learning about the life and inspirational story of black football pioneer, Walter Tull.

We used Tull’s story to bring about discussions with our young people on prejudice and discrimination. Many participants on our sessions can relate to Walter Tull’s story including his mixed heritage and his upbringing in an orphanage. Tull was subjected to years of prejudice and discrimination but remained professional, becoming the third person of mixed heritage to play football in the top division of the football league. Tull was also the first Black officer to lead White British soldiers into battle during the First World War.

It was important that we share Walter Tull’s story and the stories of other inspiring Black role models with our participants to raise awareness of the contribution Black people have made in football and in general life. Participants were really impressed with the successes Tull made during his lifetime after such a difficult upbringing, but also found it difficult to understand how a professional footballer would have to go to war.

PL Kicks Coordinator, Sandro Vashakidze said, “All the participants really enjoyed the pitch-side workshops and we will continue to have discussions with our young people on topics which affect them. We gave everyone a comic book on the story of Walter Tull to take away and hope they will continue to share his story with their friends.”

For more information on our PL Kicks and YOYO Sport sessions, please visit our website at www.sufc-community.com