The tournament’s purpose was to celebrate the success of the first professional footballer, Arthur Wharton, and aimed to bring together young people from disadvantaged areas across Sheffield.

Alongside the tournament, Football Unites, Racism Divides (FURD) put on an Arthur Wharton exhibition inside the U-Mix Centre.

During breaks from games, educational workshops were put on for players and staff members by founder and former FURD Director Howard Holmes.

Howard has long been committed to tackling racism in football and has a keen interest in projects delivered by FURD, particularly bringing the story of Britain’s first professional footballer to the young people in South Yorkshire.

‘Bringing Arthur’s story alive has been one of our proudest achievements, including the fact that he became the first black professional to play in the First Division when he appeared in goal for the Blades at Sunderland in 1895’, commented Howard.

Special guests visited the event throughout the day, including the Lord Mayor and Sheffield United Football Club players Ben Osborn and Phil Jagielka

There were also different activities such as music and sports taster sessions for participants to try. 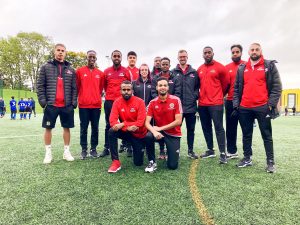 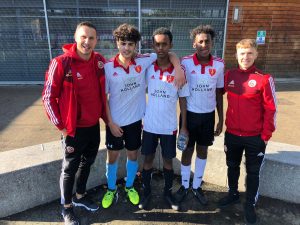