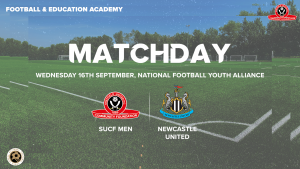 FINALLY!! The football is back! And what better way for Sheffield United’s community men’s team, to kick off their season by hosting Newcastle United. This game will mark almost 6 months without football and after speaking to coach Ryan it’s fair to say they’re happy to be return ‘The coaches and the players competing in the national football youth league are excited to see what challenges this league brings’.

Inevitably their preseason has been hindered due to covid but nonetheless, Ryan reassured me preparation has been relatively smooth ‘although covid has played a part with planning, we feel we have had a sufficient amount of preparation prior to our game against Newcastle’.

Newcastle United will be making the long journey down south and coach Ryan is well aware of the threats the opposition possess ‘we know the ability in this league will be to a high standard, we know generally teams from Newcastle are physical and able to turn out competitive performances individually and collectively’. He went on to acknowledge that as a season opener it is a tough game to start out with.

However, he added ‘from what we have seen in training our boys look confident and are ready for the start of the season and get back into the groove of playing competitive games’ it’ll be a testing game but the coaches and players are ready for what lies ahead.

It is set up to be a fantastic game of football, after a lengthy wait their season will get under way at 12pm today at their new ground situated at Handsworth.