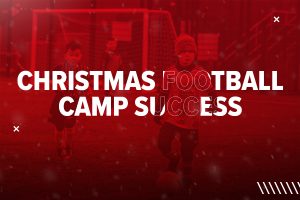 It was great to have our Football Camps running for the second time over Christmas to end what has been a difficult year for everyone. Building on October’s Camps we welcomed back our Football Christmas Camps to SGP Westfield, SGP Graves and Handsworth FC.

With over 50 children attending our Camps over the four days, the Participation & Inclusion team were pleased with how many children came along.

Ash Ibbotson, Camp Coordinator said: “We surpassed the targets that we had set.

“Initially we were unsure how many children would attend, due to the current situation that we find ourselves in, but we wanted to give children in Sheffield the opportunity to have some fun and play football in a safe environment before Christmas.

“To see the smiles on faces was fantastic. It was brilliant to see so many children playing football and enjoying themselves.”

45 participants attended these camps, which started off with fitness and core strength circuits in the morning, followed by fun competitions and football in the afternoon.

Sandro Vashakidze, Premier League Kicks Coordinator said: “It was a very successful PL Kicks Camp after a hard year trying to get through the COVID-19 pandemic.

“All of our participants had a great time on the Camps and it was nice to end the year on a positive.”