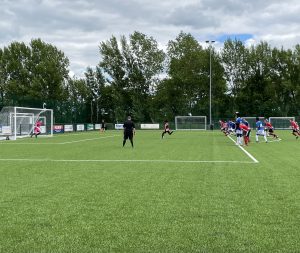 Sheffield United A team were knocked out of the CEFA Cup on penalties following a 2-2 draw against Macclesfield Town.

The Blades took the lead twice but were unable to hold on both times, before missing three penalties in the shootout.

United also had two penalties awarded for them in normal time. The first came early in the first half and was well saved by the Macclesfield goalkeeper, with United then scoring from the resulting corner.

Macclesfield equalised later in the half, but Blades would have gone into the break ahead had it not been for some impressive last-ditch defending from Macclesfield.

Midway through the second half, the Blades were awarded their second penalty. Whilst there was some confusion surrounding why the penalty was awarded, United put away the chance to retake the lead.

Macclesfield equalised for the second time just before full time, and went on to win 3-1 on penalties and advance to the semi-finals.

Elsewhere, the Men’s C community side pick up a dominant 3-8 away win at Barnsley, and the Women’s B team thrashed Bradford City 6-1.

All other scheduled games were postponed.