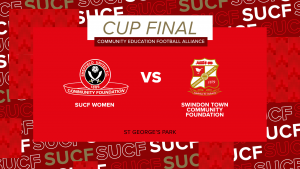 Newly appointed Women’s Coach Joe Dixon has been taking training in preparation for this game and is confident going into the clash.

Joe said: “We have been establishing our intensity again, ensuring the players are back to the standard they can perform.

“We had a friendly last week and the girls excelled in what we wanted.”

Head Coach Amy Glossop was full of praise for Wednesday’s opponents. She said: “Looking at their results last year we know we are in for a battle, they’re a fantastic team.

“However, the battle is what drives my team.

“I can guarantee they will rise to the occasion and leave their all on the pitch.”

Aside from Wednesday’s result, Amy is feeling optimistic about the season ahead.

“This season we want to compete, we want to push for the top of the table. The team is far more structured and relaxed heading into this season.”

The structure within the newly launched Football & Education Academy has raised standards and Amy feels this has benefitted the squad massively.

“All the girls are absolutely buzzing to be a part of the squad; they now know they have to fight for their shirt as competition for places is so high.

“They’re all giving it their all on and off the pitch and their attitude has been fantastic. The game is set to be a challenge as Swindon pose a lot of threat, but I believe my girls will rise to the occasion.”

The long-awaited cup final will kick off at 11.30am at St Georges Park where one of Swindon or SUCF will finally be crowned champions.